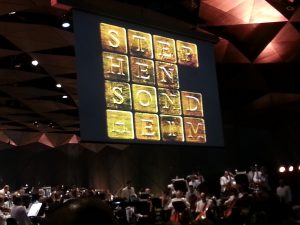 Sondheim on Sondheim was performed at Tanglewood on July 8, 2017. PHOTO BY DIANE NOTTLE

“God” wasn’t there, though Stephen Sondheim was. Neither were “You Could Drive a Person Crazy,” “Now You Know,” “Waiting for the Girls Upstairs” and other staples of the Roundabout Theater Company’s 2010 Sondheim on Sondheim on Broadway.

In fact, the concert version presented on July 8, 2018, at Tanglewood, summer home of the Boston Symphony Orchestra in Lenox, Mass., felt abbreviated in more ways than one. Though the running order of James Lapine’s original conception remained roughly the same, both the show as a whole, directed by his daughter Sarna Lapine (who staged the recent limited Broadway run of Sunday in the Park with George), and individual songs seemed truncated, perhaps to keep the running time to a brisk two hours, including intermission. But there were also some entertaining additions. 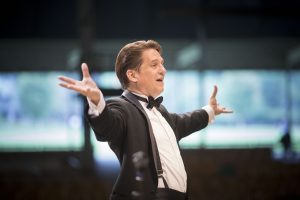 For Sondheim aficionados, the Boston Pops version, conducted by Keith Lockhart with David Loud (credited as musical director) on piano and keyboard, covered familiar ground. For newcomers and casual listeners, it served as a Cliffs Notes of Sondheim’s career, giving the highlights but by no means encyclopedic. No matter. The 5,000-seat Koussevitsky Music Shed was nearly full, and an afternoon of drenching rain didn’t deter a healthy lawn crowd from picnicking, many on tarps. No doubt the BSO Pension Fund, for which the evening was a benefit, was grateful. And one for Mahler? His Fourth Symphony the next day drew a far smaller crowd.

As on Broadway, videos and still photos of Sondheim were projected on a screen above the orchestra, telling the story of his life and work in his own words and voice, from his unique perspective. Reminiscing about knocking on doors in the 1950s, he made getting his big break as lyricist of West Side Story sound so easy. “Epiphany” was broken in two by his video explaining Sweeney Todd’s shifting moods.

If opera is the bass-baritone Phillip Boykin’s comfort zone, he easily transcended it. He started the split “Epiphany” sitting almost too calmly on a stool, then picked it up after Sondheim’s commentary with a vehemence befitting the character. While equally intense as Czolgosz in “The Gun Song” from Assassins — one of the evening’s most fully realized numbers, with Boykin nimbly handing it off to ensemble members — he also showed a comic side as the producer in “Opening Doors” (“There’s not a tune you can hum …”).

Ruthie Ann Miles, the onetime usher who won a Tony Award last year as Lady Thiang in The King and I, brought a joyful presence to the evening. Having infused “Take Me to the World” with a palpable hunger for life, she seamlessly segued from the TV interviewer in “Franklin Shepard, Inc.” (sung with panache by Gabriel Ebert, himself a Tony winner for Matilda, as Charley to McGrew’s shamefaced Frank) into a slow, dreamy “Good Thing Going.” In “Beautiful,” from Sunday, she rendered the lyric “You make it beautiful” not as a statement, but as a command.

Carmen Cusack (Sunday at New York City Center) was equally convincing as a 1950s Brooklyn girl in “So Many People,” Fosca in “I Read” and “Loving You,” and Sally in “In Buddy’s Eyes.” In a mash-up of “Losing My Mind” and “Not a Day Goes By,” she and Miles conveyed all the anguish of the characters in both songs.

“Best Thing That Ever Happened” (not to be confused with “Best Thing That Ever Could Have Happened,” from Merrily We Roll Along) put the straight (Bounce) and gay (Road Show) versions side by side; for those who have always liked the character of Nellie in Bounce, it was nice to hear her pragmatism and profanity from Naumenko. But that second-act number seemed tame in comparison with the first-act-curtain medley of “Happiness,” “Ever After,” “A Weekend in the Country” and ”Sunday,” which quickly morphed from a duet for one heterosexual couple into a comic “La Ronde” of sexual pairings.

The visuals designed by Peter Flaherty, marred only by a brief freeze at the top of Act II, effectively mixed video, still photos and GIFs to keep the storyline moving. While the clip from “Passione d’Amore” felt a little too close to Tanglewood’s annual Film Night, the projections included some clever touches: the trees with white leaves for “Weekend” that turned pointill-esque colors for Sunday; a “Send In the Clowns” montage with one line each by singers including Glynis Johns, Frank Sinatra, Patti LaBelle, Judy Collins, Elizabeth Taylor, Barbra Streisand and Judi Dench; assassins and their victims, not limited to the ones in the show, but also Robert F. Kennedy, Martin Luther King, Malcolm X, two Gandhis (Mahatma and Indira) and Benazir Bhutto. Among the vintage stills, perhaps none was more poignant than the one from Company of Sondheim apparently giving notes to just a sliver of Beth Howland’s face, looking every bit as perplexed as her character, Amy. 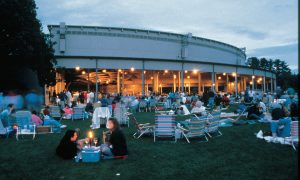 Just as good as the projections was the staging of Sunday: good when two singers were handed parasols, even better when they and the rest of the cast assumed the poses of the figures on the Grand Jatte.

The show ended with a double finale: a medley of “Company” and “Old Friends,” with head shots of Sondheim’s friends, mentors and collaborators filling the screen, followed by the ever-wistful “Anyone Can Whistle,” accompanied by what sounded almost like a toy piano. For all the evening’s sophistication — and Sondheim’s — it ended with the essence of any classic: simplicity.

“We had the same priorities.  We wanted to take the audience where we wanted to … END_OF_DOCUMENT_TOKEN_TO_BE_REPLACED

In 1997, Stephen Sondheim sat down with Library of Congress Senior Music … END_OF_DOCUMENT_TOKEN_TO_BE_REPLACED

Editor's note: Since the printing of this article, Sondheim is reportedly no … END_OF_DOCUMENT_TOKEN_TO_BE_REPLACED

Isn’t it rich? His career arc stretches from writing the lyrics for West Side … END_OF_DOCUMENT_TOKEN_TO_BE_REPLACED