The following article first appeared in The Sondheim Review in Spring 2010 as part of the Following Sondheim series which focused on Sondheim’s impact on the next generation of musical writers. Click here to read Stephen Flaherty’s companion piece, More to Hear.

I suspect that if you swabbed the inside of most theatrical lyricists’ mouths or sectioned a piece of our brains, you’d find something in our DNA that proves we’re all descended from Stephen Sondheim. It’s a little like having a parent you adore, respect, emulate and fear, and to whom you’re constantly being compared unfavorably. I still recall the day in 1985, when a certain famed lyricist (not Mr. Sondheim) happened to be critiquing my work, an early version of my musical farce Lucky Stiff. “This is unproduceable! Undirectable!” the famous lyricist shouted at my writing partner and me, in front of the assembled crowd. “You’re nothing but f…ing Sondheim clones!” Although I remained seated in a little gilded chair, I wanted to leap up and punch him in the nose — not only because he was so hateful, but also because he had a point. Until that moment, I had no idea how profoundly influenced I was by Sondheim’s work.

Unlike a lot of writers I know, I didn’t grow up singing along to Stephen Sondheim records in my bedroom. Down in Neptune, N.J., I’d never even heard of him. I doubt anyone there had, at that time. I memorized the lyrics of the Beatles, Simon and Garfunkel, Carole King and Burt Bacharach, danced and sang to Motown records and began to write and sing my own pop songs, accompanying myself on my mother’s battered old guitar. The first Broadway show I ever attended—not counting our Neptune High production of The Most Happy Fella — was a revival of Fiddler on the Roof, which I attended on a trip to New York City in my senior year. (Sadly, what impressed me most at that time was not the brilliant structure, nor Bock and Harnick’s marvelous score, but the chubby actress with the great pop voice who turned out to be an unknown named Bette Midler.)

But once I graduated from college, moved to New York and began attending plays and musicals, my interest in the dramatic form took hold. At the suggestion of a friend, I applied for the BMI Musical Theatre workshop, dashing off what I imagined to be theatrical lyrics, and was accepted.

Soon, I was learning the rudiments of craft and hanging out after class at Ralph’s, a nearby restaurant on West 56th Street, elbow to elbow with writers who burned to take the Great White Way by storm. Some people ask, “What would Jesus do?” We asked, “What would Sondheim do?” In those years, his influence enveloped us like a shimmering mist. We obsessed over perfect rhymes, three-syllable rhymes, rhymes that “turned the corner,” internal rhymes; we congratulated one another for wordplay (the more complex the better), and for dark or unusual subject matter. I remember being fascinated by the music and lyrics of fellow workshopper Michael John LaChiusa and stunned into sullen admiration when he used the word “feckless” in a lyric — how Sondheim-y was that?

Thinking about Sondheim’s rigorous craft kept me up nights, chewing on the tiniest word choices: “Yes, I never really knew the guy?” “Oh, I never really knew …?” “And I never really knew …?” I made long lists of phrases that might evoke a particular time or place, the way I’d heard he did. I rolled the sounds of the words on my tongue, trying to make my lines sing as easily as his and sound like natural speech. Just as art students sit on the floor of the Met, copying the masters into their notebooks, or aspiring poets memorize Shakespearean sonnets, I was studying, learning from and, yes, copying Sondheim.

In 1983, I connected with another member of the workshop, the composer, Stephen Flaherty, in whose music I could hear a bit of Sondheim, but also something quite different. As we began to develop shows together, he and I had the opportunity to present our work several times in the Dramatists Guild Musical Theatre Development Program, founded by Sondheim some years before. Seated on those little gilded chairs, in the glamorous old Dramatist Guild quarters high atop Sardi’s, facing an audience of 30 or 40 aspiring writers, my collaborator and I absorbed the comments of the panel, which often included Sondheim. He was always supportive, and his remarks usually had to do with craft:

On Bedazzled (unproduced, presented in 1984), a show about a short order cook who sells his soul to the devil for seven wishes, he suggested that we might want to try connecting one of the seven deadly sins to each one of the seven wishes. This became the organizing principle of the show, and the first time I became acutely aware of structure.

On Antler (unproduced, presented in 1985), a show about an old man in South Dakota who gives his land away to strangers, Sondheim pointed out that not rhyming the end of the opening number might be more interesting than rhyming it. “There’s nothing wrong with not rhyming,” he said. After all my concern about finding the cleverest rhymes, this came as a freeing notion.

But it was Lucky Stiff that became a turning point for me. The show was a wacky little farce, involving a British shoe salesman, a $6 million inheritance, a charity for dogs, a gun-toting murderess and a dead body that has to be taken on vacation. After that first excoriating critique, we had gone back to the drawing board to do a major rewrite, throwing out much of our early material and writing a great deal that was new. Now the show felt like something written less by Sondheim and more like Ahrens and Flaherty. In 1987, we brought it back to the Dramatists Guild, and this time, Sondheim was there.

Most of what he said was positive. He enjoyed the song “It’s Good To Be Alive,” in which the dead body bounces along, traveling by train to Monte Carlo, and he laughed at the notion of “Him, Them, It, Her,” as yet unwritten, in which we planned to have people running around, looking for the missing corpse, as doors slammed. “I get it,” he said. “You’re doing an Ealing Studios comedy!”

He only found fault with one song, a wistful ballad for the lonely and loveless heroine, Annabel Glick, who sits alone in a Monte Carlo nightclub, knitting. The hook contained what sounded to him like a false rhyme: “I … wouldn’t waste my time,” and he suggested I try to fix that. He also suggested that I might want to rethink the moment in terms of tone. Recognizing not only the imperfect rhyme, but also the fact that our musical farce didn’t seem to accommodate “serious” material, we replaced that song with a comic ballad called “Times Like This,” in which the heroine yearns for the company of a dog. It was the first lyric I’d ever written that got a consistent reaction every time — first laughter, and then a sweet sigh of empathy for lonely Miss Annabel Glick. I believe this was the moment when I first began to settle into my own voice and come into control of my craft.

But Sondheim continued to have a quiet effect. Shortly after that presentation, I nearly fell off my chair to hear his voice on the phone, telling me that Lucky Stiff had won a Richard Rodgers Award. The award enabled us to have a reading at Playwrights Horizons, and the following winter, while on vacation in England, I received word that Playwrights had decided to produce the show. Celebrating the news of my first off-Broadway production over dinner in a London restaurant, I looked up and, in a moment of surreal coincidence, saw Sondheim across the crowded room. I spent the rest of my meal trying not to look his way, desperate not to disturb him. But on the way out of the restaurant, he stopped at the door, turned back and gave me a silent thumbs up. My “unproduceable” show was being produced. Thanks to his help, I had stepped out of his shadow and into the first small light of my own.

Time flies when you’re having a good time. Stephen Flaherty and I have been writing together for 26 years. The Dramatists Guild Musical Theatre Program, which Sondheim founded and where we first presented our fledgling work, has evolved into the Dramatist Guild Fellows Program and, taking another lesson from Sondheim —the one that says, “Thou shalt pass it on” — Stephen Flaherty and I are the program’s co-chairs, and have been mentoring a select new group of emerging playwrights and musical theatre writers each year for the past nine years. In fact, at this moment, I’m in the process of listening to submissions for our tenth-year class. In so many of these young writer’s songs, I can detect the familiar echoes of Sondheim’s work.

But I won’t point my finger and hiss “Clone!” I understand by now that Sondheim and his many masterworks are integral to the study of musical theatre and contain inspiring lessons for learning how to write it. He’s the Monet that so many young writers will copy into their sketchbooks in order to grow. Eventually, the imitators will fall away, but some of these new composers and lyricists will allow his craft to seep into their DNA. Then they’ll go on to find out who they are and what they really have to say for themselves. They’re probably over at Ralph’s Restaurant right now, gesticulating and arguing over glasses of cheap red wine: “What would Sondheim do?”

Steve Sondheim has influenced me in many ways on the road to becoming the writer I am. But last summer, he brought me full circle to a moment of transition. Out of the blue, I received a note from him in the mail. He wrote that he’d been listening to a tape of various songs, and had come across a singer performing “Times Like This” from Lucky Stiff. Then, after all these years, he went on to give the song some very high praise. I wonder if he knows that it wouldn’t have existed, but for him. 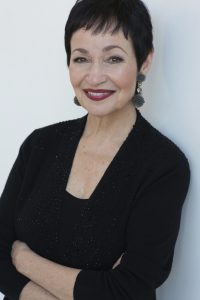 LYNN AHRENS (words) and STEPHEN FLAHERTY (music) are Tony winners and two-time Academy Award nominees. They have written musicals together for 26 years. Their mutual credits include Ragtime, Once On This Island, Seussical, My Favorite Year, Chita Rivera: The Dancer’s Life, Lucky Stiff, Dessa Rose, A Man of No Importance, The Glorious Ones, and the feature film Anastasia. Ragtime is currently enjoying its first Broadway revival. They serve on the Dramatists Guild Council and co-chair the Dramatists Guild Fellows Program.

“We had the same priorities.  We wanted to take the audience where we wanted to … END_OF_DOCUMENT_TOKEN_TO_BE_REPLACED

In 1997, Stephen Sondheim sat down with Library of Congress Senior Music … END_OF_DOCUMENT_TOKEN_TO_BE_REPLACED

Editor's note: Since the printing of this article, Sondheim is reportedly no … END_OF_DOCUMENT_TOKEN_TO_BE_REPLACED

Isn’t it rich? His career arc stretches from writing the lyrics for West Side … END_OF_DOCUMENT_TOKEN_TO_BE_REPLACED