The following article first appeared in The Sondheim Review in Summer 2010 as part of the Following Sondheim series which focused on Sondheim’s impact on the next generation of musical writers.

Since the dawn of time, Man has told tales of horror and devastation. Perhaps they serve as a warning. Perhaps they draw a community together. Or maybe people just have a collective need to scream in terror. I know this: these stories are borne of our deepest fears, our most devastating shames and humiliations. This is my story. It is all true. Horribly true.

In order to tell this story, I have to hide someone’s identity. He was my best friend back then. I myself have shown a surprising willingness over the years to demonstrate and recount my own stupidity, but this person has been understandably more reluctant to do so. Nonetheless, he is part of the story and it can’t be told without him, so I’ll refer to him by an alias: He shall be known as Franz Liszt.

OK, here goes. It’s 1993. I’m 23 years old. All I dream about is writing for the musical theatre. I have been dreaming of it for 10 years, nonstop, and it is because of the work of Stephen Sondheim. Had it not been for Sweeney Todd and Sunday in the Park With George, I would have probably joined a rock band and tried to be Billy Joel. But once I heard what could be done, what enormous musical and emotional potential could be unleashed, I knew I had to write musicals. To say I’m a Sondheim Worshiper is to understate the case considerably — I owe my ambition and my dreams to him. Without his example, I wouldn’t even know who to become.

By this time, I’ve met Steve (can I call him Steve?) a couple of times, primarily because of my relationship with Daisy Prince, and he’s always been perfectly cordial, but I’m still utterly intimidated by him and, having been told of his withering wit, I’m wary of engaging too much with him for fear of being eviscerated by some casual sarcasm. I don’t want to come off like some teenage musical theatre geek, but honestly, I sort of am a teenage musical theatre geek and I know how uncool that is. So I keep my distance.

Franz is not as sheepish as I. He’s a little older, but he’s also devastatingly charming, impossibly talented, and confident that he can guide any conversation safely to shore. I occasionally refer to him as “The Waring Blender” because he is so smooth.

So Franz writes Steve a letter. Something like: I’m an aspiring composer and I would love to show you the work I do, casual but focused, chummy but respectful. To our collective shock, Steve writes back. AND: he invites Franz over to his place, to the House of Stephen Sondheim, so that Franz can show him what he’s been working on. I’m paralyzed with jealousy, but Franz has clearly won this round; I don’t want to seem like a copycat by writing my own letter (and oh God, what if he doesn’t invite me to his place?), so there’s not much to do but wait for the inevitable story of Franz’s Visit to The Oracle in Turtle Bay.

The day comes, I sit around miserably pretending I’m not sitting around waiting to hear what happened. Finally the phone rings. Franz is bubbling with excitement, and I don’t even remember what he told me about the lunch or the house or anything because he has some extremely important news: Knowing that Franz and I are such good friends, Steve has invited us, both of us, to go see his newest show, his treat, and then have dinner with him afterwards. Much squealing and giddiness, much counting of our lucky stars.

Oh, if only we had known.

The night comes, Franz and I take our seats, and we notice that sitting right behind us is Frank Rich, the chief theatre critic for The New York Times. Do you see the stars aligning against us? We chose to go on the very same night that the Times came to review the show. The most important night in the life of any show in New York City.

The curtain rises, and we expect to see Sweeney Todd. We expect West Side Story. We expect Biblical greatness. There is no show on Earth that could have delivered something as magnificent as we were expecting. Two-and-a-half hours later, Franz and I file out of the theatre anxiously.

We get to the restaurant. Steve is sitting there waiting for us. There’s an appetizer already on the table. I am about to sit down with my idol, Stephen Sondheim, for dinner. I’m 23 years old. I’m totally overwhelmed.

We say nothing. I mean, small talk, yeah, sure, and pleasantries. But we don’t even mention the show. For TWENTY MINUTES. Steve is sitting across from us, becoming ever more uncomfortable and upset, and Franz and I are nattering on like the hosts of a morning talk show, oh the weather, the food, the décor, what shows are coming in this season, anything except the performance we just saw. On the night that Frank Rich came.

Finally, after an eternity, Steve mumbles, “So, uh, did you like the show?”

Here’s where you scream in terror.

Actually, however, the blood is already on the wall. It didn’t matter at that point what we said, the damage had been done. Our silence had told the story with astonishing completeness.

It is only now, on the cusp of my 40th birthday, that I understand what power young people have. They know something that we’ve lost somehow — we want the approval of our peers, yes, but the generations coming next, these children, those are the people whose approval we truly need if our lives are to mean anything, if our art is not to have been in vain. It had never occurred to me that Steve invited us to see his show because he wanted our approval. I couldn’t have understood that at 23 years old. If I had, I would have just told Stephen Sondheim how lucky I felt that I lived in a world that had been changed by his art.

The rest of dinner went pretty much as you’d expect; many extremely awkward silences punctuated by bursts of frantic, desperate conversation about anything other than the slaughtered elephant in the middle of the room, and finally, a confused and relieved parting.

Franz and I knew it had been a disaster. Immediately upon returning home, I called Daisy to ask for her advice. What could be done to repair the damage?

A council was immediately convened of Daisy’s family and myself. It was determined and arranged that I should call Steve the next day at his house in Connecticut, that I should be appropriately humble and abashed, and that I should be prepared to hear some harsh words of wisdom. It was also made clear that I should not expect this particular wound to heal easily or quickly.

So I called Steve the next day. It was not a fun phone call. He was clearly still hurt, but he acknowledged at one point that “that’s exactly the kind of stupid thing I would have done at your age.” Which I appreciated.

And then Steve said something which I have never forgotten, and I will paraphrase it here so that it may serve as a lesson to all, a lesson learned by me at the foot of the master:

Nobody cares what you think. Once a creation has been put into the world, you have only one responsibility to its creator: be supportive. Support is not about showing how clever you are, how observant of some flaw, how incisive in your criticism. There are other people whose job it is to guide the creation, to make it work, to make it live; either they did their job or they didn’t. But that is not your problem.

If you come to my show and you see me afterwards, say only this: “I loved it.” It doesn’t matter if that’s what you really felt. What I need at that moment is to know that you care enough about me and the work I do to tell me that you loved it, not “in spite of its flaws”, not “even though everyone else seems to have a problem with it,” but simply, plainly, “I loved it.” If you can’t say that, don’t come backstage, don’t find me in the lobby, don’t lean over the pit to see me. Just go home, and either write me a nice email or don’t. Say all the catty, bitchy things you want to your friend, your neighbor, the Internet.

Maybe next week, maybe next year, maybe someday down the line, I’ll be ready to hear what you have to say, but that moment, that face-to-face moment after I have unveiled some part of my soul, however small, to you; that is the most vulnerable moment in any artist’s life. If I beg you, plead with you to tell me what you really thought, what you actually, honestly, totally believed, then you must tell me, “I loved it.” That moment must be respected.

It’s a shame I had to learn that lesson in front of the person whose approval I desired most in the world. It’s a shame that I was robbed of a friendship with Steve for many years because of my youthful arrogance. But ultimately the wound healed, in its way, and I’ve had enough putzes come up to me to share their completely unwanted opinion of my own work that I think it must be some kind of karmic payback.

It’s an ugly story, yes, but I tell it here because, in spite of its humiliations and horrors, that evening of dreadful mistakes gave me one more reason to be thankful for Stephen Sondheim: I could have spent an entire life worshiping at his altar and never understanding that such great art as he creates can only be borne of deep vulnerability. I have allowed myself to feel and embrace my own vulnerability ever since. The village is safe again. The sun has risen. Our heroes go into the new world, bloodied, changed forever. End of story. 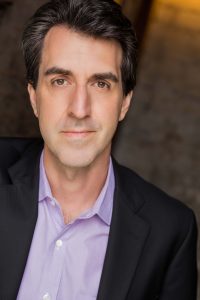 JASON ROBERT BROWN is the Tony Award-winning composer and lyricist of Songs for a New World, Parade, The Last Five Years, and 13.  He is also a pianist and leader of The Caucasian Rhythm Kings, with whom he recorded his album “Wearing Someone Else’s Clothes” (Sh-K-Boom Records).

“We had the same priorities.  We wanted to take the audience where we wanted to … END_OF_DOCUMENT_TOKEN_TO_BE_REPLACED

In 1997, Stephen Sondheim sat down with Library of Congress Senior Music … END_OF_DOCUMENT_TOKEN_TO_BE_REPLACED

Editor's note: Since the printing of this article, Sondheim is reportedly no … END_OF_DOCUMENT_TOKEN_TO_BE_REPLACED

Isn’t it rich? His career arc stretches from writing the lyrics for West Side … END_OF_DOCUMENT_TOKEN_TO_BE_REPLACED