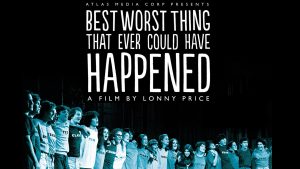 No show in the annals of the American musical theater has risen so promisingly, crashed so quickly and become such an iconic work as Merrily We Roll Along — Stephen Sondheim and George Furth’s 1981 show directed by Harold Prince. How did the team of Sondheim and Prince, collaborators on five groundbreaking musicals in the 1970s, go so wrong on this one? Or did they? Sondheim’s score is as exquisitely crafted as any in his canon, and Merrily has received numerous successful productions in revised versions.

For the young cast of the 1981 production, the experience was exhilarating and wrenching, as is Lonny Price’s engrossing documentary, Best Worst Thing That Ever Could Have Happened, which chronicles the process leading up to the show’s opening and swift closing (16 performances) and the impact it continues to exert on its original participants.

Price has a unique perspective on the Merrily saga. He was cast in the first production as Charley Kringas, the optimistic-turned-cynical playwright (or cynical-turned-optimistic playwright, since the musical, like its source, the 1934 Kaufman-Hart play of the same name, wends its way backward). To work on Broadway — with Sondheim and Prince, no less — was a veritable dream come true for the then 22-year-old, who’d been so smitten with the team’s creations in the early 1970s that he invested his Bar Mitzvah money in the original production of Pacific Overtures.

He also invested what appears to have been his emotional core in Merrily, which is heartbreakingly evident as Best Worst Thing unfolds from the discovery of extraordinary archival footage of interviews, readings, auditions and rehearsals through the challenging preview period, opening and closing.

Deftly edited and paced, the documentary is a loving balancing act between euphoria and anguish. A dessert birthday party at Price’s apartment before rehearsals began includes an impromptu performance by Sondheim playing and singing “Good Thing Going.” (We see the music and lyrics: “Going, Going, Gone,” underlining something we already know will occur.)

But even theatrical gods don’t know when disaster will strike. Nearly 35 years after the show closed, Hal Prince says he was never happier than during Merrily rehearsals, which he thought would be a big success. Were his decisions to cast inexperienced actors (aged 16-25) and put them in T-shirts misguided? Was the present-to-past narrative too confusing for audiences to follow? Replacing a leading actor (James Weissenbach, whose role of Franklin Shepard was assumed by Jim Walton) and the choreographer (Ron Field with Larry Fuller, a change not mentioned in the documentary) couldn’t alter the show’s fate.

Price, who would go on to become a successful director, portrays the Merrily experience and its aftermath without any inclination toward objectivity. He is shown in home movies as a youngster wanting nothing more than to be onstage. He wipes away tears as he watches himself on an audition interview for Merrily and quietly concurs that he likes the person he was.

The aura becomes almost mystical whenever elegiac music accompanies the camera panning across an empty Alvin Theatre (now the Neil Simon), where Merrily so briefly resided. The joy, anticipation and anxiety everyone felt are evident as the young actors rehearse with unflagging fervor, the creative team makes multitudes of changes and the expected triumph never happens. Frank Rich, a longtime champion of Sondheim-Prince musicals, says he found it painful to write his negative review in The New York Times.

The cast managed one act of defiance — making the magnificent original cast album the day after the show closed — before going on with their lives. Most of the players never again appeared on Broadway. Only one cast member, Jason Alexander, achieved fame, as George Costanza on the hit TV show Seinfeld, while the rest continued trying their luck in show business or enter unrelated fields. Sondheim and Prince parted ways and found success with other collaborators, until reuniting for Bounce in 2003.

Price followed up on the 1981 events more than three decades later by visiting cast members who had leading roles in the original production. Ann Morrison (Mary Flynn) teaches theater to people with special needs in Florida; Terry Finn (Gussie) has appeared in TV shows and films; Abby Pogrebin (Evelyn) has had a successful career as journalist, TV producer and author; Walton (Franklin) is a Broadway veteran.

The significance of Merrily in all of these people’s lives is reinforced overtly and subtly. Upon returning to the empty Neil Simon Theatre, a group of the original actors gathers around an upright piano and clutch one another while Walton performs “Growing Up,” which was added to the show in 1985.

If that packs a wallop, just wait. As the closing credits roll, we hear Walton — this time from the original cast album — singing the show’s most haunting song. For Price and company, the bittersweet lyrics sum up everlasting feelings:

Not a day goes by,
Not a single day
But you’re somewhere a part of my life,
And it looks like you’ll stay.

DONALD ROSENBERG is author of The Cleveland Orchestra Story: “Second to None” and editor of EMAg, the magazine of Early Music America.

“We had the same priorities.  We wanted to take the audience where we wanted to … END_OF_DOCUMENT_TOKEN_TO_BE_REPLACED

In 1997, Stephen Sondheim sat down with Library of Congress Senior Music … END_OF_DOCUMENT_TOKEN_TO_BE_REPLACED

Editor's note: Since the printing of this article, Sondheim is reportedly no … END_OF_DOCUMENT_TOKEN_TO_BE_REPLACED

Isn’t it rich? His career arc stretches from writing the lyrics for West Side … END_OF_DOCUMENT_TOKEN_TO_BE_REPLACED