In just a few weeks, a musical theater rarity will take the stage of New York City Center: Do I Hear a Waltz?, the 1965 tuner with music by Richard Rodgers, lyrics by Stephen Sondheim and book by Arthur Laurents. Directed by Evan Cabnet, the piece will be the final offering in the 2015-2016 mainstage Encores! season. It will star Tony Award-nominee Melissa Errico as Leona. Errico recently took the time to talk with Everything Sondheim just as she was starting her journey with the show.

Everything Sondheim: How did you come to Do I Hear a Waltz?

EvSo: Did you know the show before you met with the team?

Errico: Not at all. In my millions of years of singing at concerts, I’ve performed “Do I Hear a Waltz?” and never understood it. So after the call, I had 48 hours to study the script before this interview. And I couldn’t go to bed. I was up until 1:30ish which, to us moms, is like your four in the morning. I couldn’t put it down. It was so hip.

EvSo: Where are you in the process of preparing?

Errico: Evan [Cabnet, director] and I had a wonderful first rehearsal, and that was only yesterday. We left with a ton of good ideas and feelings about who Leona is and what’s going on.

EvSo: How are you and he approaching the show?

Errico: Evan knows everything about the drama and the gossip about the original production, but he doesn’t want to weigh down this process with the heavy stresses that were on it back in 1965. Neither he nor I are stressed. All I want to do is bring some happiness and love to this wonderful piece.

EvSo: Can you tell us a bit about Leona and how you’re approaching her?

Errico: I don’t think she knows who she is. I think she puts this time aside, this money aside. She’s bought a couple of nice dresses to go to Italy to spend some time that she’s never had with herself. She’s by no means a wealthy person. It’s a special occasion for this girl who raised her siblings after her parents died and has lived a life of taking care of other people.

I don’t think we’ve had time to address where pleasure falls in her life for her and her own needs. I think she learns a lot as a watcher, not unlike Bobby in Company. I think she watches things play out in other people’s marriages and their choices, and then she gets tested. Unlike Bobby, she actually has the opportunity, and it sort of flares up something in her and she can’t do it. She can’t do it, and I guess I have to think to myself, “Has she had a string of these married men before?”

When we get to the end and she sings “Thank You So Much,” I really want to put an accent on “So much.” I think that there is something she learns, and I want to figure out what that is.

I know I don’t want to feel as if she is just a train wreck and that she’s just a loser and she just walks off with her bag at the end: I want her to have had some sort of paradigm shift. Maybe she was too ruthless. Maybe she missed out on something. Maybe he taught her something. Maybe he opened something in her so that her next encounter might go better.

EvSo: Have you had a chance to think about other numbers?

Errico: There’s a song in the show “Everybody Loves Leona,” which was cut and never got orchestrated. I’m being given the wonderful opportunity of deciding whether it should go back in, and if it does, they’ll orchestrate it.

I think the number was cut because it was a sarcastic rant the way it was played, and she’d already had a drunken sarcastic rant in a book scene. So I think it might be interesting to deliver this song as a woman who’s reading the reviews of who people think she is. I think possibly she’s not having a rant, but she’s replaying all of the things that have been said and all of her identity stuff — and so it could be her “Being Alive” or her 11 o’clock song.

EvSo: Do you have any other thoughts on what might happen in the presentation at City Center?

Errico: After she’s fallen in the canal and is soaking wet — I’m praying they’ll put a big bucket [of water] on the side of the stage and I will put my entire body in it — I have a whole vision of how we can do it. Now, I’m a big girl, so it will be a big bucket. I’ll get in and get myself soaking wet; get the wig wet just enough to not ruin the microphone and then come out and sing that high note. I’m hoping I can be dripping wet. I don’t know if the stage can handle it, but I hope I can literally look like I fell in the canal. I think that would just be bee’s-knees funny.

EvSo: Are you and Leona at all kindred souls?

Errico: I am at midlife, and I’m a little stuck with all of my rules about things, too. I am a little bit of a “should” person. I don’t always think it’s such a bad thing. All of us running around and screwing everything in sight wouldn’t be such a great thing either. The world would be a hot mess. So I’m just going to move forward thinking of Leona as a “Bobby”-type Sondheim character who is on that stage sharing the viewpoint of the audience. I’ll be watching marriage as you, the audience, are watching marriage, and I will digest it, and then in her story I’ll try to have a relationship with this man that hurts because she doesn’t know how. She couldn’t even have any fun with it. She got a married guy, so she can’t have any fun.

EvSo: A few years ago you played Clara in Passion at Classic Stage Company. Will your experience with that Sondheim musical inform anything you’re doing in Waltz?

Errico: I’ve never experienced the love of a play as deeply as I did in Passion, and I think Clara’s an awful, pained person to be. I think she can only love him in that room. There’s just no way. That room is it. It is her only space for happiness. There is no way to live outside. She is so trapped in time [1832], and it’s in Italy. There must be something about Italy that allows Sondheim to get a little more … I don’t know what the word is … Soft? Weak? Connecting?

But this is so different. I see the light in Passion as dark and candlelit and so much shadow, so much secrecy. And I see Leona and Waltz in bright sunlight. She doesn’t even know she has something to learn. I feel so much happiness in it. Even on the cover of Arthur Laurents’ play it says, “A comedy by …”

Passion is so fraught, and this doesn’t feel fraught. Even though there’s struggle, it doesn’t feel fraught because it’s very natural. I’m going to go into this very relaxed. I think she loves connecting with people. I think she’s very social. So she enjoys living in broad daylight. She doesn’t have her life in a tiny room. Passion is so private and Leona is so not private. She’s the life of the party, but with Passion there’s something so private about it, it’s almost alarming to watch.

EvSo: Would you like to talk at all about your experiences on Passion?

Errico: I’m sorry the show for me was such a hard time. I lost my voice; I got sick. But in a weird poetical way, when the book is written about method actors and how they care about things, that’s the perfect play to get demented by and attached to. I was so attached. The hardest thing for me was not getting sick. The vocal problem I had was not a huge medical problem. Leaving the show was the big problem. Can you believe? I got attached and I loved it so much. I loved everybody: Judy [Kuhn] and Ryan [Silverman] and Sondheim and John Doyle. He’s a drug. You work with him and you’re like in a cult. You want to put the shirt or the uniform on that says “John Doyle forever.” He’s such an intimate director. Ultimately, everything mended, and I’m all good. I was given every blessed thing back, plus some. I think the doctor threw in a few notes.

EvSo: Are there any Sondheim shows you’d like to do?

Errico: The older I get, I want to do all of it. Anything I can. Anything I’m not too old for. Someone asked me to play Mrs. Lovett recently! They were going younger with Mrs. Lovett, and I love the idea. I think I’m crazy enough to do it even. I think I’m going to age nicely into that crazy lady. And what about Desirée? [Editor’s Note: Watch Melissa sing “Send in the Clowns” from A Little Night Music at Wolf Trap.]

EvSo: Is your process for preparing to perform a Sondheim number similar to working on a song by other writers, for example Lerner and Loewe?

Errico: Everything he touches is always so special that you need to pay very close attention. I wouldn’t say that I don’t give the other things attention. But they aren’t as demanding. Other writers, like the ones you mentioned, are brilliant — but Sondheim? I often feel there’s almost a prismatic shift each time a word is spoken. With each line, there’s probably a little turn, sort of how the light against the wall would turn with a prism.

Even with the Richard Rodgers score [in Waltz], Sondheim has put more psychology into it. It’s not as simple as “High on a hill sits a lonely goatherd …” You have to have your brain on all the time. Sondheim’s brain is always at work, and there’s a rush about singing his music. There’s a little adrenaline, a little on edge. For me it sparkles because you feel his intelligence, and nothing is ever twee or simple. You can never say it’s “cute” or “charming.” Every sentence reveals something else.

EvSo: Is there anything we’ve not covered?

ANDY PROPST, a journalist and author based in New York City, is editor/content chief for bwaytunes.com. His writing has appeared in The Sondheim Review, The Village Voice, Time Out New York and Backstage, as well as the website he founded, AmericanTheaterWeb.com. His biography of Cy Coleman, You Fascinate Me So, was published in 2015. 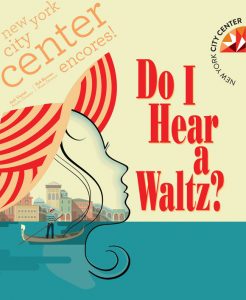 Do I Hear a Waltz?

“We had the same priorities.  We wanted to take the audience where we wanted to … END_OF_DOCUMENT_TOKEN_TO_BE_REPLACED

In 1997, Stephen Sondheim sat down with Library of Congress Senior Music … END_OF_DOCUMENT_TOKEN_TO_BE_REPLACED

Editor's note: Since the printing of this article, Sondheim is reportedly no … END_OF_DOCUMENT_TOKEN_TO_BE_REPLACED

Isn’t it rich? His career arc stretches from writing the lyrics for West Side … END_OF_DOCUMENT_TOKEN_TO_BE_REPLACED