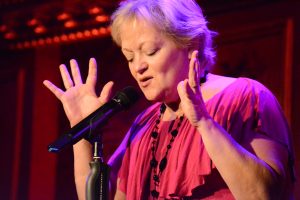 Maria Friedman in performance at 54 Below in Manhattan. PHOTO BY PHIL ROMANO

Does Maria Friedman remind you a little of Barbara Cook? Though her blond hair is a short bob rather than a flowing mane, Friedman seems to be reinventing herself in mid-career just as Cook did in her 50s, and Stephen Sondheim’s music is playing a big part.

From Sept. 19 to 23, 2017, she brought Maria Friedman Sings Sondheim and Bernstein to 54 Below in Manhattan for five performances. Just in from Boston, where she not only directed the Huntington Theater Company’s current Merrily We Roll Along but also performed this solo show as part of the Huntington’s season-opening celebration, Friedman showed no signs of wear. Dressed on opening night in midnight blue with a shawl sparkling like city lights, she pointed out that Sondheim and Bernstein were both “quintessential New Yorkers.”

Friedman is a Sondheim veteran, having played Mary in Merrily We Roll Along, been nominated for an Olivier Award as Dot in the 1990 London Sunday in the Park with George and won as Fosca in the 1996 Passion. Originally, she explained, she intended this to be an all-Sondheim show, ending with “Somewhere.” But her musical director, Jason Carr, overruled her: “It’s not Sondheim; it’s Bernstein.” So she decided to do both — logical, considering their collaboration on West Side Story and Bernstein’s centennial year, already starting with a bang.

Carr’s piano overture opened with a few teasing notes from Bernstein’s “Glitter and Be Gay” before romping through Sondheim’s “Comedy Tonight” and “Company,” then back to Bernstein with Candide and “New York, New York.” Once Friedman took the stage, she presented a series of mini-sets on themes including love, loss and New York, segueing seamlessly from one song into another.

Friedman’s “Lonely Town” sounded more West End than Broadway before she slid into a masterly “Another Hundred People,” in which she made a complete journey from innocence to experience, from wide-eyed newcomer — “I want to dress all in black!” — to a New Yorker who knows the score. “In Buddy’s Eyes” (suggesting Friedman would make an admirable Sally Plummer in Follies) was sandwiched between “A Little Bit in Love” and “I Have a Love.” “So Pretty,” a 1968 Bernstein protest song, led into “Take Care of This House” from 1600 Pennsylvania Avenue — so timely and so chilling — and “Children Will Listen.”

While Friedman often sounded breathy in the early numbers, her voice progressively gained strength through the 85-minute show. Her renderings throughout reminded listeners that acting a song is at least as important as singing it.

Between songs, she told war stories about singing Sondheim on the London stage. She offered her experience with “Getting Married Today” for a Cameron Mackintosh anniversary concert, which, she knew, “If it went catastrophically wrong, that would be understating.” (Apparently it didn’t; she proceeded to sing it wearing a bridal veil, sounding comic rather than desperate, Amy as a New York transplant with a British accent.) Or the time she was Mrs. Lovett in a concert version of Sweeney Todd and clearly heard a woman in the audience ask her companion, “Do you want a bonbon?” And then there was the first time she sang Sondheim for Sondheim himself — “Broadway Baby,” here as a dreamer absolutely sure the dream will come true.

As for that career reinvention: Like so many actresses before her, “I got to a certain age and hit a brick wall,” said Friedman, 56. Now, as a director, she said, “I cast women of a certain age whenever I can.”

After 75 minutes she did end, for the moment, with “Somewhere.” But then she returned — “Prepare to see a middle-aged woman’s humiliation” — to sing all the roles in “Gee, Officer Krupke.” In an effort worthy of Jefferson Mays’ multi-role performance in A Gentleman’s Guide to Love and Murder, switching off headgear (a Boston Red Sox cap, a British judge’s curly white wig) and voices (nasal teenage Brooklynese, psychiatric German) to match the roles. One last piece of Bernstein, the ever-wistful “Some Other Time,” closed the show. Played offstage to Merrily,” Friedman was last sighted holding court at the bar, still in midnight blue and still sparkling.

“We had the same priorities.  We wanted to take the audience where we wanted to … END_OF_DOCUMENT_TOKEN_TO_BE_REPLACED

In 1997, Stephen Sondheim sat down with Library of Congress Senior Music … END_OF_DOCUMENT_TOKEN_TO_BE_REPLACED

Editor's note: Since the printing of this article, Sondheim is reportedly no … END_OF_DOCUMENT_TOKEN_TO_BE_REPLACED

Isn’t it rich? His career arc stretches from writing the lyrics for West Side … END_OF_DOCUMENT_TOKEN_TO_BE_REPLACED