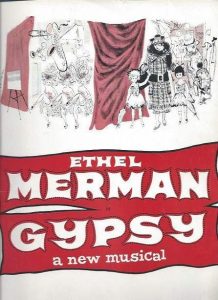 Having served as lyricist for West Side Story, young Sondheim was itching for the chance to work as a composer, too, and his friend playwright Arthur Laurents recommended him for that role with a new show based on the fanciful memoirs of striptease artist Gypsy Rose Lee.

But there was a stumbling block: The show was being built around legendary star Ethel Merman, and she wasn’t willing to take a chance on an untested young talent. Despite Laurents’s endorsement, she insisted on an established composer she’d worked with before, Jule Styne. Following his advice during West Side Story, Sondheim’s mentor Oscar Hammerstein II convinced him to grab the opportunity and write for a star.

Working on Gypsy, described as “a musical fable,” with Laurents’s concise, character-driven script and Styne’s ability to crank out tunes proved be a positive experience for all involved, and the show came together quickly over just a few months in late 1958. It debuted successfully in May 1959 and had a nearly two-year run of 702 performances. 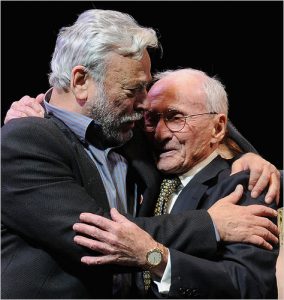 Sondheim’s second Broadway production is considered to be one of the greatest Broadway musicals of all time. Playing the domineering stage mother Rose, Merman proved that she was more than a comedienne who could belt a tune. Her DNA is all over the role, but it’s been played memorably in revivals by performers as diverse as Angela Lansbury, Tyne Daly, Bernadette Peters, and Patti LuPone.

Following the rousing overture, Act One starts at a vaudeville theatre in Seattle. Rose Hovick’s daughters, Baby June and Baby Louise are auditioning a variety act (“Let Me Entertain You”) for Uncle Jocko’s show. From offstage the overbearing Rose orders Louise to “Sing out!” Driven by extravagant dreams of show business success, she has no qualms about badgering Uncle Jocko to hire her girls. When they lose to a talentless tap dancer; Rose vengefully bursts the girl’s balloons and drags her girls away. Back home she implores her father for funds to put together an impressive act that will achieve her show business ambitions. Weary of her relentless requests, he refuses. Rose impatiently leaves, stealing his gold plaque that she can pawn to pay for her a trip to Los Angeles (“Some People”). 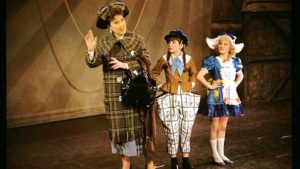 In Los Angeles, Rose meets mild-mannered Herbie, a former talent agent now working as a candy salesman. He recognizes Rose as “a pioneer woman without a frontier.” She coaxes him (“Small World”) into handling a new act—in reality a retread—“Baby June and Her Newsboys,” starring June and introverted Louise. This and subsequent acts as the girls grow older barely change, other than a few new costumes made by Louise.

One night everyone gathers in a rundown hotel room to celebrate Louise’s birthday. Herbie has invited Mr. Goldstone, a booker from the prestigious Orpheum Circuit, and Rose pulls out the stops to convince him to present her girls (“Have An Eggroll, Mr. Goldstone”). Louise’s celebration is forgotten; she shares her sadness with her pet (“Little Lamb”).

For New York City, and with the girls much too old to play children, Rose reworks the act as “Dainty June and Her Farmboys.” Herbie proposes marriage, but Rose has other priorities. When he threatens to leave, she tells him, “You’ll Never Get Away From Me.” A producer offers June a substantial contract if she will go to school, take acting lessons and keep her mother out of the picture. Rose won’t hear of it, and Louise and June imagine life if Rose changed her ways (“If Momma Was Married”). June says: “Momma can do one thing: she can make herself believe anything she makes up.” 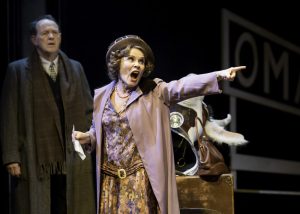 Imelda Staunton in the West End Revival of Gypsy

Many of the boys have outgrown the act. One of them, Tulsa, confides to Louise that he will strike out on his own (“All I Need Is The Girl”). She fantasizes dancing with him, and it’s clear that Louise is smitten. Her dreams are dashed when June and Tulsa elope. Rose is stunned by June’s betrayal. Herbie presses his case for marriage and quitting show business, but Rose won’t have it. Stunningly she transfers her dreams for June to shy Louise. But it’s apparent her own ferocious ambition is the driver (“Everything’s Coming Up Roses”).

In Act Two, vaudeville is dying. The new act, “Madame Rose’s Toreadorables,” is—of course—one more tired rendition of past performances, now with girls. Louise, now an adult and wearing a blonde wig, announces to Rose that she is not and cannot be June. Rose tries to smooth over the hard feelings; with Herbie, they sing a song of momentary reconciliation “Together Wherever We Go”. 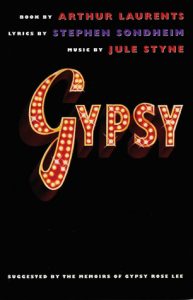 The act evolves again into “Rose Louise and Her Hollywood Blondes.” Herbie has booked a two-week gig in Wichita, but it’s apparent that it’s a burlesque house where striptease is the main event. Rose tries to prevent Louise from going onstage, but she convinces her mother to agree, since they need the money. Three broken-down strippers advise her that “You Gotta Get a Gimmick.”

Louise performs the familiar, shopworn act, and Rose finally concedes to marry Herbie when the current contract is over. As they pack to leave, the theater manager says his star attraction has been arrested. Rose immediately offers Louise: “My daughter can do it!” Rose manically assembles costumes and music for Louise’s new act, and Herbie departs in disgust, convinced she will never change. Shy Louise can barely overcome her stage fright, but her mother forces her onstage. Louise begins with her shy rendition “Let Me Entertain You,” the song they’ve used repeatedly. But as she gains confidence, her act evolves into a full-fledged strip routine. In short order, Louise becomes a burlesque superstar, the glamorous and confident Gypsy Rose Lee.

In Louise’s New York dressing room at Minsky’s burlesque theater, she’s a headliner, fawned over by reporters and 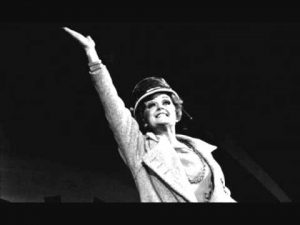 Angela Lansbury as Mama Rose in the 1974 revival

photographers. Embittered and hurt, Rose sees she’s no longer needed and storms onto the empty stage. “Why did I do it?,” she asks. “What did it get me?” and hurtles into a performance of towering ambition and wounded martyrdom, belting out her personal envy and ambition (“Rose’s Turn”). As she finishes, she bows to the empty house. Louise, who has witnessed her performance applauds and tells her, “You really would have been something, Mother.” They are seemingly reconciled, which launches Rose into yet another “dream.” As they exit, Rose stares at the runway lights, but they quickly fade.

In 1997, Stephen Sondheim sat down with Library of Congress Senior Music … END_OF_DOCUMENT_TOKEN_TO_BE_REPLACED

Editor's note: Since the printing of this article, Sondheim is reportedly no … END_OF_DOCUMENT_TOKEN_TO_BE_REPLACED

Isn’t it rich? His career arc stretches from writing the lyrics for West Side … END_OF_DOCUMENT_TOKEN_TO_BE_REPLACED