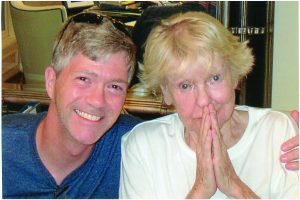 Elaine Stritch with John Bell during one of his visits. PHOTO PROVIDED BY JOHN BELL

It was six weeks later in 2014 before I was able to make my final visit with Elaine. I had called every couple of weeks to check in and each time she urged me to visit. Her excitement pleased me because it made me feel she was still engaged and seeking interaction and stimulation. After my last visit, I had feared she might be on a path toward isolation, surrounding herself with just caretakers and her family.

When I arrived, she was asleep and the condo was very quiet. Instrumental versions of old standards and Broadway show tunes were playing on the music channel on her television, giving the condo the feel of an upscale nursing care facility. The sad but not particularly surprising news was that Elaine was now under hospice care.

When I entered her bedroom, she was sitting up in bed and drinking some orange juice. “Who’s that?” she asked as I walked into the bedroom.

“Oh my God, of course. John, come here darling, let me get a good look,” she said.

She smiled broadly and seemed glad to see me, very glad to have a visitor. Her caretaker left us alone.

“God, you look good, but you’ve lost weight,” she said. “Why don’t you eat a milkshake now and then?” 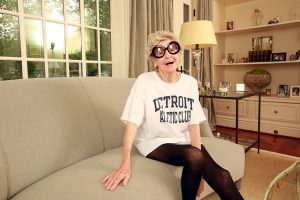 Elaine Stritch in her Detroit condo. PHOTO BY FABRIZIO CONSTANTINI FOR THE NEW YORK TIMES

Other than her painfully obvious weight loss, Elaine actually looked pretty good. He face was full and had good color. Her hair had recently been cut rather short. It looked very good on her. She was well rested and eager to talk.

I took her hand and said, “It’s real good to see you Elaine. You’ve been on my mind a lot.” She reached out to touch me, stroking my arm and leg from her wheelchair. She seemed to want touch. “What’s new?” she asked.

“Oh, not much. School is out for the summer. I had to step in and direct The Music Man at the university because a faculty colleague got sick,” I said.

“Did you ever play Marian the Librarian?” I asked.

“Are you kidding, who would want to? It’s got to be one of the most boring roles ever written,” she said sounding very much like her old self.

“Yeah, I just heard that today,” I said.

“Well, I told them no more hospitals. I’m done with all that shit. They said the only way to pull that off was to agree to hospice. So I said, what the hell.”

“Are you feeling OK?” I asked.

“I’ve got a boatload of aches and pains, John. Getting in and out of bed and into the wheelchair hurts like hell. But otherwise I’m doing OK, darling. At least I think I’m doing OK. The Hospice chaplain stopped by today, and I sent him away. I hope he doesn’t know something I don’t,” she said.

With that, one of her caretakers — a rather beefy young guy — came into the bedroom to transfer her to the wheelchair. “OK, do you want to put your arms around my neck,” he said. To which Elaine replied, “Oh my god, there’s that line again.”

At the kitchen table, Elaine asked me to read to her from the Times.

“There’s a new high-powered revival of Edward Albee’s A Delicate Balance headed for Broadway this fall,” I announced.

“Well, I think Glenn will be pretty good. I don’t think Lithgow is right. He’s a funny guy, but he’ll go for the gags and that will kill that show,” she said.

“I’m sorry I never had a chance to see you in the play.”

I asked Elaine about her favorite role over the years. Without hesitation, she said: “Feste in Shakespeare’s Twelfth Night. He was a clown who drank and made people laugh. He was all comedy as am I. He has a great line, which I always thought was a perfect description of me, ‘God give them wisdom that have it; and those that are fools, let them use their talents.’ If that isn’t how I made my way through life, I don’t know what is.”

The next morning, I got up early to make my exit. Typically, I would step quietly into Elaine’s bedroom to wake her caretaker so that he or she could deactivate the alarm system and let me out. This morning, I tiptoed into the bedroom and woke her male caretaker who was sleeping beside Elaine on the bed. He whispered that Elaine was awake.

“Her eyes are closed, but she’s been awake for a while.”

I approached Elaine on her side of the bed and gently called her name. She opened her eyes and said, “Good morning, John.”

“Elaine, I’m heading out. I didn’t want to wake you, but I’m glad you’re awake so I can say goodbye.”

“When you coming back?” she said.

“Come any time, you know that. Any time, darling.”

I leaned in close and kissed her cheek. “I do. Keep eating, will you?” I said.

“I will if you will. Have a milkshake now and then why don’t you?”

She grabbed my face and looked me in the eye and said, “I love you too. Now have a safe drive and call me when you get home so I won’t worry.”

I made my exit and sat in my car in front of the Dakota right across from her first floor bedroom windows. The bedroom glowed with the blue glow of some old movie playing on her television. I thought to myself that this might be the last time I would see Elaine. I thought back about this incredible journey I had taken with her and about all the ways she had influenced me.

With both gratitude and sadness, I drove away. 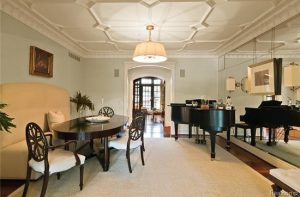 Over the next two weeks, Elaine continued to lose weight, becoming more frail and weak. Her caretakers attended to her needs and neighbors and friends were stopping by sensing that her time was coming to an end. Elaine’s breathing became labored and irregular. As it often does in the final stages of life, the breathing can be very deceptive. Those who were with Elaine reported that long pauses would pass between breaths to the point that they weren’t sure if she had stopped breathing for good. But even through her last night, she kept on, without pain or fight.

On the morning of Thursday, July 17, 2014, with her caretakers and a neighbor at her bedside, Elaine died.

News of her passing was picked up in print and broadcast media from New York to Hollywood. Her death was noted on the nightly news broadcasts of the three major networks and several cable stations. The following day, the marquee lights on Broadway were dimmed as New York’s theater community saluted Elaine with its highest honor.

Elaine’s funeral was held in Chicago, a private ceremony for family and friends. Fitting for Elaine, the minister who presided included Broadway show tunes in the celebration and asked those in attendance to honor Elaine with something everyone agreed was her favorite sound: a round of applause.

As she had directed, she was buried next to her husband John Bay. His side of the headstone listed the Groucho Marx line, “Hello, I must be going.” Her portion of the shared tombstone listed her name and her birth and death dates. Underneath her name was her chosen counterpoint to that line: simply, “Later.”

JOHN BELL is the head of the division of performing arts at DeSales University.

“We had the same priorities.  We wanted to take the audience where we wanted to … END_OF_DOCUMENT_TOKEN_TO_BE_REPLACED

In 1997, Stephen Sondheim sat down with Library of Congress Senior Music … END_OF_DOCUMENT_TOKEN_TO_BE_REPLACED

Editor's note: Since the printing of this article, Sondheim is reportedly no … END_OF_DOCUMENT_TOKEN_TO_BE_REPLACED

Isn’t it rich? His career arc stretches from writing the lyrics for West Side … END_OF_DOCUMENT_TOKEN_TO_BE_REPLACED