AUTHOR’S NOTE: This is the second in a series of visits and conversations chronicling the late Elaine Stritch’s final acts. The first appeared in the April/May 2017 print edition of Everything Sondheim. 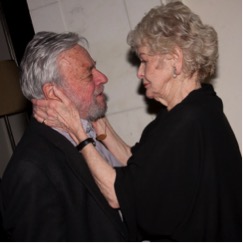 Elaine Stritch told John Bell that she liked Sondheim’s songs because “they’re smart. His talent is so big, and those songs are so good.” PHOTO PROVIDED BY JOHN BELL

After Elaine’s visit to DeSales University’s campus in January 2009, I sent flowers to her at The Carlyle. She called to thank me. “I had a great time, John. Now when you coming to New York?”

Elaine always dangled an open invitation at the end of our conversations. My nature would be to chalk this up to polite posturing, but she was always ready for the next point of contact. So in March, two months after her campus visit, I called Elaine and invited her to dinner. She was delighted.

I was excited because it would be the first time I visited without an agenda — no angling for an interview or trying to tie her down for an appearance. It was just the two of us, one-on-one. I was flattered. And always a bit nervous.

She met me in the lobby of The Carlyle dressed in walking clothes: white short shorts and sneakers. I was in dress pants, a jacket and tie. I didn’t know we were going walking. I was not prepared for the 30-block (about a mile-and-a-half), fast-paced walk Elaine inflicted upon me. I honestly had a hard time keeping up.

After about 30 minutes, she suggested we go for dinner at Sant Ambroeus, one of her favorite neighborhood eateries. We settled in and Elaine ordered a cold, non-alcoholic beer. Wanting an alcoholic beer, but deciding I didn’t want to make an insensitive choice considering her sobriety, I ordered an iced tea. Elaine ordered a scrambled egg and toast. As the waiter walked away, she barked for a smaller fork. “This fork is too goddamned big. Every time I come into this fucking place, I have to ask for a smaller fork. What’s with you people? Come on, get it right!”

Trying to divert, I told Elaine how much my students enjoyed her visit. She reported she didn’t think she performed “Fifty Percent” as well as she could have. “I wasn’t inside it,” she said. “I can usually get myself inside when I know I’m not there. But I couldn’t get in, and the more you try, the more you become obsessed with it — which always kills it.”

I told her I thought the rendition was quite moving and asked if, when singing it, she was thinking of John Bay, her husband. She said no. “I don’t relive moments from my life in my work. No, theater isn’t therapy for me. Although maybe it should be.”

Next Elaine announced she was working up another cabaret act for the Café Carlyle, this time focusing on all Sondheim songs. Recalling our first meeting, when I interviewed her for The Sondheim Review, I asked Elaine what she liked about Sondheim’s songs.

“They’re smart. His talent is so big, and those songs are so good. Each word of each line has a million possibilities. As an actor, you know every time you sing it you’ll be able to travel a new road. Material like that is rare, but with Steve it’s in every song.”

“Where does it come from?”

“How the hell do I know?” she replied. “Talent is what it is. And it’s hard to define. But you know it when you see it. And I know it — I’ve worked with some pretty talented writers, Noël Coward, Edward Albee — and Steve is as good as they come. And I have a theory about talent.”

“What kind of relationship do you have with Steve today?”

“None. Really. We don’t stay in touch. I haven’t worked for Steve in a long time, and that’s the only time I can talk to him, when we’re working and when we’re talking about work. I can’t have a quiet sit down with Steve Sondheim. It’s impossible.”

“Yes, I’d love it. I love him. But he’s too guarded and it’s too frightening. But yes, I’d love to have a close relationship with him. I’ve always been terribly attracted to him — to him and his talent. But he and I never were able to get close. And I’ve often wondered why.”

“Do you think he might be as wary of you as you are of him?”

“Yes. I think we’re a lot alike, and we’ve both got a lot of bullshit we carry around and neither one of us wants to have to deal with the other. Don’t get me wrong: There have been times when he’s been sweet to me, but there have been other times when he has practically ignored me and, as far as I’m concerned, that’s the worst thing someone can do to me.”

“We had the same priorities.  We wanted to take the audience where we wanted to … END_OF_DOCUMENT_TOKEN_TO_BE_REPLACED

In 1997, Stephen Sondheim sat down with Library of Congress Senior Music … END_OF_DOCUMENT_TOKEN_TO_BE_REPLACED

Editor's note: Since the printing of this article, Sondheim is reportedly no … END_OF_DOCUMENT_TOKEN_TO_BE_REPLACED

Isn’t it rich? His career arc stretches from writing the lyrics for West Side … END_OF_DOCUMENT_TOKEN_TO_BE_REPLACED